Pushing Through a Brick Wall: Exhibit 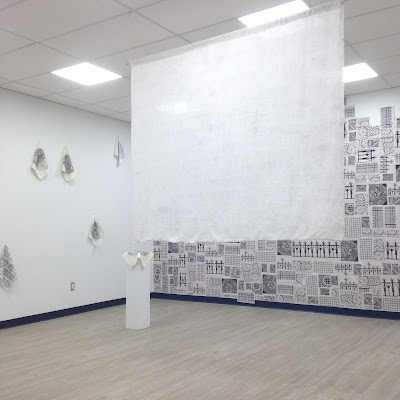 Pushing Through a Brick Wall is a soft manifesto. The works in the exhibition use the visual language of domestic craft and textile to subvert and dismantle structures, physical and ideological, that seek to divide. A brick wall is transcribed on a linen tablecloth through charcoal rubbing, a peace wall is transgressed by a wayward plastic bag, a flag emptied of nationalistic rhetoric declares “homeland, homesick, homeless.” This work springs from Hawkinson’s experiences in the contested territories of Israel/Palestine and Northern Ireland.

In the mid 19th century Belfast was the linen capital of the world. In the early sixties linen mills began folding and Northern Ireland’s narrative was overshadowed by sectarian violence and division. Linenopolis and Pushing Through a Brick Wall were inspired by the physical and socio-political environments in Northern Ireland. The works fall into the genre of ‘counter-monument’ by creating ephemera from actions that challenge how collective events are remembered and memorialized. Brick walls and monuments shift from permanent to permeable when transferred to linen.

Interface follows a plastic bag through the streets of West Belfast. It takes on an anthropomorphic quality; cowering in the shadows of the peacewalls and courageously transcending barriers. The print installation Partition explores the visual resonance between fences and lace patterns. Waver is a standard for the displaced, a marker for the anti-hero. Unlike flags found in Northern Ireland and Israel/Palestine; this flag is void of nationalist ideology. It’s symbolism reaches uncomfortably past human tendencies for belonging and nationhood.

With A Journey of Significance Hawkinson documents all the broken carvings from an olive wood factory in Bethlehem, Palestine. The figurines weave a universal story of expulsion and wandering. Similarly, Diaspora fits shards of ceramics found in Jerusalem, Hebron and Bethlehem into a foreign form. It’s olive wood base hopefully inscribed with ‘RETURN.’

These works aim to confront the operations of power through a contemporary reworking of artisan craft and domestic labour. The work is political, but in a poetically nuanced way. What is rigid and impassable becomes malleable. There is an invitation in Pushing Through the Brick Wall. One that resists discourse of rigid ideological positions and instead offers viewers a place at the table. 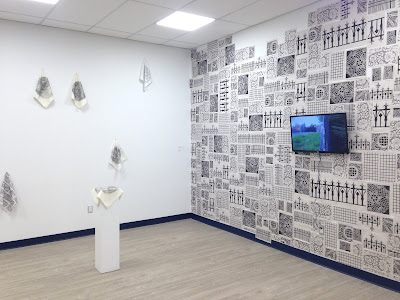 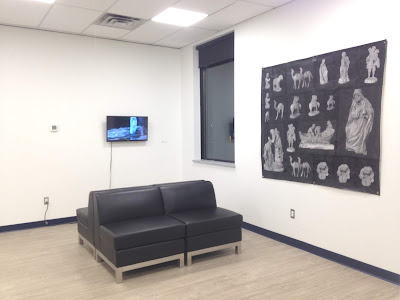 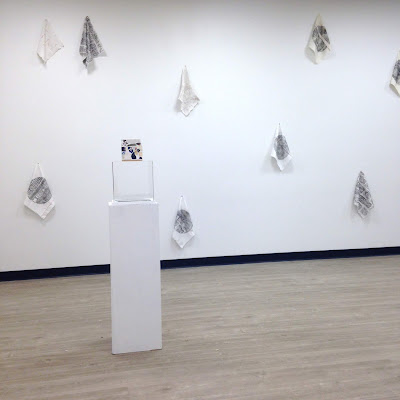