December is for resting.

Sorry for the lapse of communication. This is the first time in six months that I haven't had something to plan/prep for so I am relishing the quiet time. The most exciting news I should share is that I am the proud recipient of the DTES Small Arts Grant! Studio time will pick up again in January. I plan on developing my work through printmaking. Pictures to come in the new year.

A gift for you: www.jennyhawkinson.com

Merry Christmas!
Posted by Jenny at 8:38 PM No comments:

Much gratitude and many pictures!

This weekend I had the great pleasure of opening the Cave to Vancouver art lovers as a part of the Eastside Culture Crawl. Thanks to everyone who came out; your support and encouragement has been an amazing boost for me this week as I clean up the studio and move on to greater things. As a follow up to the Culture Crawl, I want to open the studio for a more intimate evening of art viewing and discussion. More details to come soon!

Some early morning documentation before the crowds came. 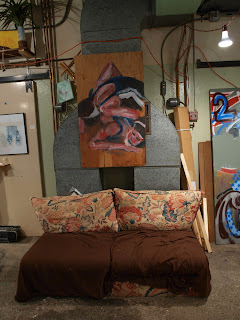 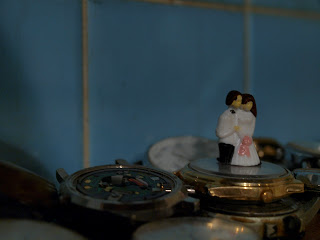 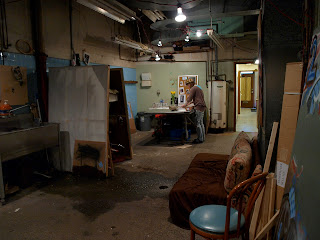 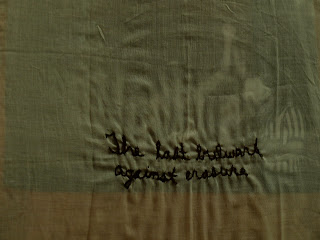 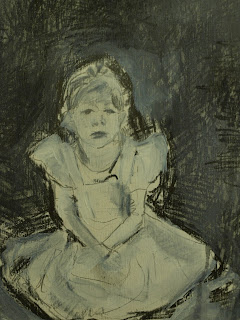 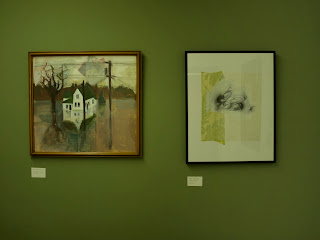 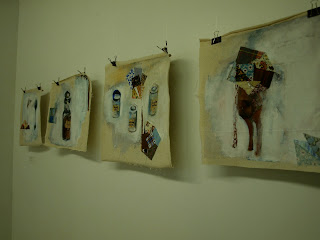 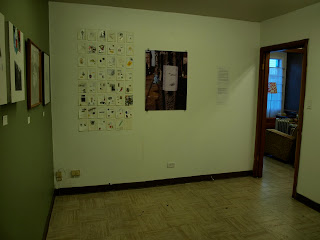 There are a lot of things brewing in my cave studio. Here's a taste... 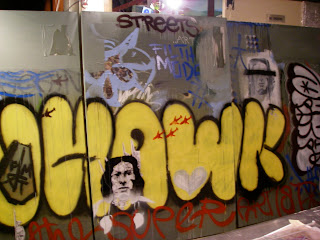 I love stories. If you have known me for any amount of time I'm sure you picked that up. And so, it absolutely delights me to share about a book of interviews and stories and images of  100 artists, musicians, dancers, ship builders, cooks, writers, and innovators in the Vancouver area who are "exploring the collision of faith and creativity".  We Make Stuff Volume 1 will be released to the masses in November. More details to come! 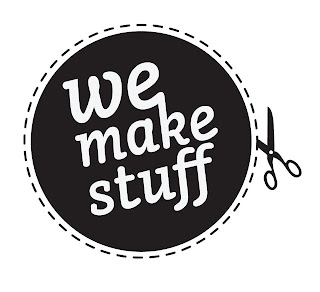 An excerpt from my portion of the book:

When you make the commitment to cross the line from normalcy into a world where your vulnerability seems to be unfairly exposed all the time, resistance happens more frequently. And yet, I find that some of my best work is made under this kind of pressure. Perhaps the Creative needs something or someone to push against in order to be challenged.
Posted by Jenny at 6:53 PM No comments:

The Semi-Gallery made its debut at the 2012 Creative World Festival in Mission. Our first group show included myself, Laura Breukelman and Matthew Quick.


All photos taken by Jared Korb
Posted by Jenny at 1:39 PM No comments:

The NYC Collection: an essay

Last summer I created a series of collages assembled from found objects off the streets of New York City. It was a small act of preserving the impermanent and the fragile. This summer I made a return trip to complete the project. In a moment of pure, accidental brilliance, I photo-copied my collages.  The result is a homecoming of sorts. The objects are returned to the streets. Still ephemeral, the wheat-pasted copies of collage correspond with their natural environment, and will eventually get torn down, or covered over by other graffiti artists.

Last year marked the first Creative World Arts & Justice Festival. Last week marked the second. The images below are a project that I designed for a public art mural at the festival in 2011. 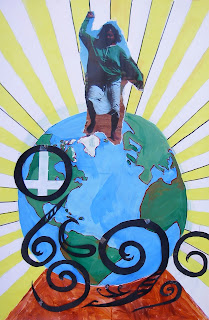 Two years spent obsessively reminiscing. Trying to draw memories from the past into the present. And I’m  still thinking about it. Nostalgia and loss. I am left to wonder; why, after all I’ve been through the last few years in my “research” (which doubles as my life), I still can’t portray loss the way that I would like to. Maybe its because if I admit to actually experiencing this loss, then it will become real.

I remember the summer between high school graduation and my first year of University. Packing up my room was an emotional overhaul. My aunt came over to help me sort through the memorabilia of an entire childhood existence. It was a ritual of leaving my past and cleaving to my future. Derrida writes about this. He says that ‘archive is not a question of the past, it is a question of the future...” I don’t get it yet, but I am learning.

What happens when we find out that our memory is not so accurate as we had hoped? My imaginary world fell apart when I heard The News. I say ‘imaginary’ because that’s what it was. Apparently my facts were never right to begin with.

My family loves to tell stories. I know I’m a story teller, because almost every time I start a conversation I say “I have a story to share....”  Growing up with relatives as neighbors, I heard some stories a hundred times over, but they never grew old.

There used to be pigs on the farm. My mom hated feeding the pigs. She would take the slop down to the pig pen and throw it over the fence because the pigs would snuffle at her nylons and rip them. She also hated frogs. One day her sister convinced her to pet a frog. Aunt Holly spent several hours trying to catch the little guy. She ran it to my mom and thrust it in her face. My mom screamed and the frog got away. Aunt Holly was furious at the futility of her labor.

These are stories I grew up with. But I guarantee you that most of them are completely skewed and I unconsciously made up a few things along the way.

Mom always wanted me to paint a portrait of my great-grandma. I constantly put it aside. I wasn’t talented enough to accurately render her physical likeness and her personality, so I didn’t even bother. Until two months ago. My unconventional portrait is made up of old reference photos, scraps of memory, materials, and plenty of legend. I wonder if we were to meet our deceased love ones decades later, would we be disappointed by how normal they are? Legend builds up over time, until eventually you have little more that the faint idea of a person with lots of embellished stories and emotions.

For further insight into my art making process check out This Great Society's recent blog post where you will find an interview. Yep, thats right. I was featured this month! 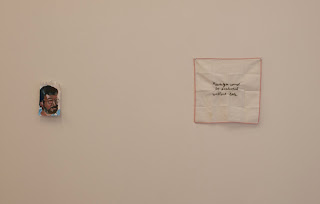 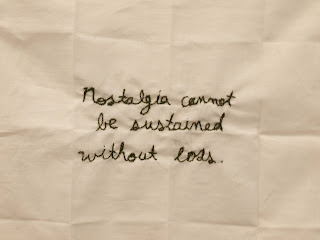 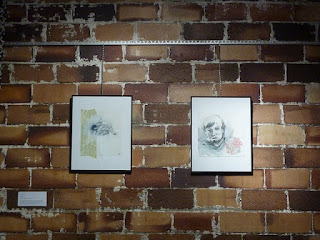 This was shot at the Converge Magazine Social a few weeks ago. I submitted work from the Family Pieces series. Thanks Jill Cardwell!! (see her work here).

Both these works come from a larger series titled Family Pieces, a collection of family photographs revisited as fragile graphite drawings on mylar. Through a material process of concealing and revealing the images are blotted out or enhanced. This speaks to the reality of memory as an elusive vapor. Even in moments of perfect lucidity the mind cannot recall every detail to its fullest. This process of constructing and deconstructing has become integral to the creation of Family Pieces. The layering of fabric and mylar bring a tangible nature to the passage of time, nostalgia, and hidden histories.
Posted by Jenny at 5:59 PM No comments: 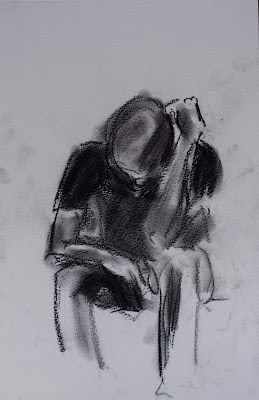 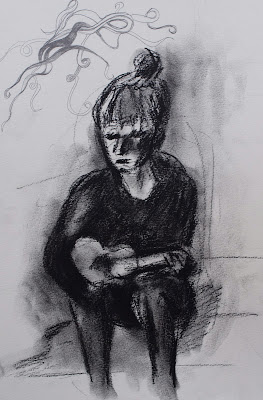 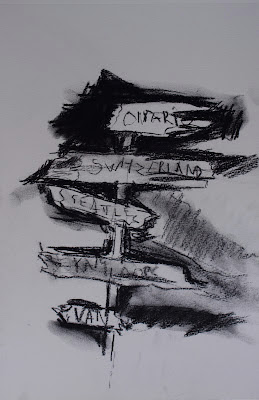 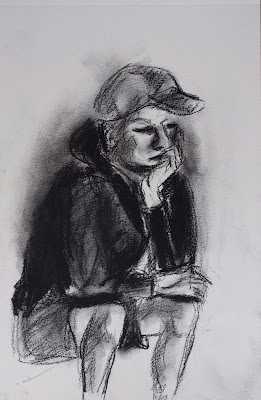 Below are two details from the portrait series I'm working on. These paintings are connected to the 'Family Pieces' project I've been developing for the past year and a half. More to come later. 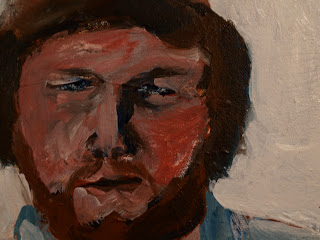 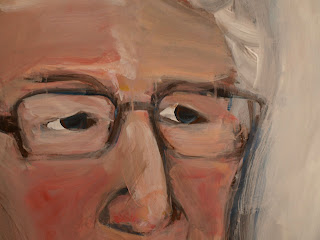 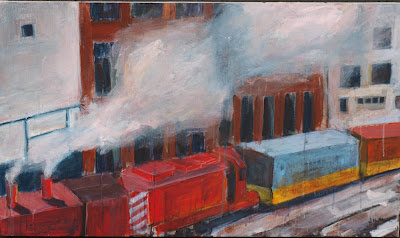 It was a good night. Thanks for coming out!! 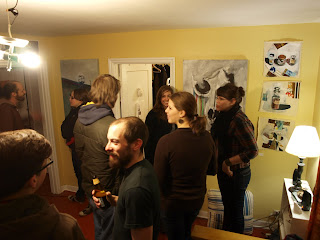 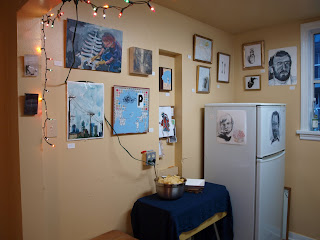 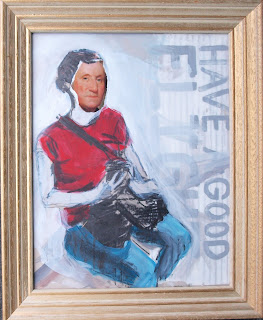 Have a good flight, mixed media on mylar, 2012
An afterthought from New York.
Posted by Jenny at 9:42 PM No comments:

A few months ago I posted a preview of the NYC Collection, work that I made while visiting New York City on an art trip. Here is the full installation view!!! With some details posted below... 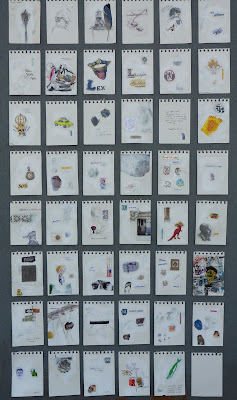 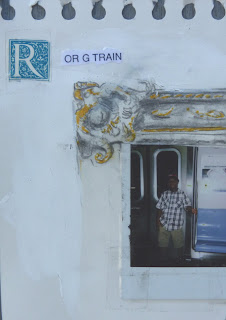 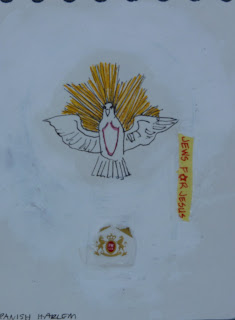 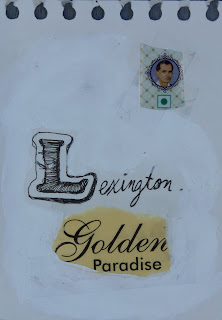 And now a shout-out for... nostalgia!

The background piece is the last remnant of wallpaper after my dad remodeled the house years ago. I miss being surrounded by that. 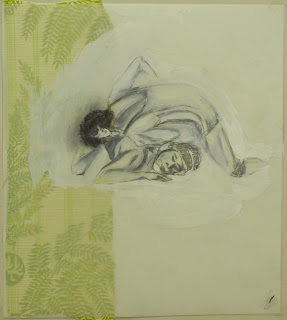