Pushing Through a Brick Wall 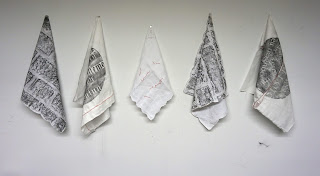 “Can an artistic intervention truly bring about an unforseen way of thinking... can an absurd act provoke a transgression that makes you abandon the standard assumptions about the source of conflict? Can an artistic intervention translate societal tensions into narratives that in turn intervene in the imaginary landscape of a place? And can those kinds of artistic acts bring about the possibility of change?” -Francis Alÿs

This body of work grew from a year of art research trips to Northern Ireland. Pushing Through a Brick Wall is a collection of graphite rubbings and needlework pertaining to the physical and socio-political environment of Belfast. In the mid 19th century, Belfast was the linen capital of the world. The textile industry flourished for decades. In the early 60‘s linen mills began folding and Northern Ireland’s narrative was overshadowed by The Troubles.

The white handkerchief with red embroidery is a scaled map of peace walls that are located on sectarian divides.The marks appear as scars or stitches. Brick walls and monuments shift from a permanent status to permeable when transferred to linen. Words were collected from tombstones, public squares, churches and commemorative plaques. They become anti-monuments. Harmless handkerchiefs, white towels of submission, a rag to wipe up the mess. Domestic objects weighted with conflict and confession.

May this piece be a quiet attempt to acknowledge the depth of pain experienced by all, while also offering the possibility of a way through the brick wall. 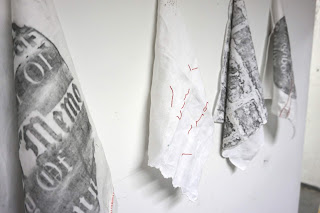