The show is up at the Bleeding Heart Art Space in Edmonton for the month of January! Take a look if you are in the area. If you aren't, take a peak below.

Origin Stories is an exploration into the complex elements, both internal and external, that contribute to identity. It questions the validity of memory and highlights the universal desire to find home in the midst of a shifting world.

Floods have had a place in origin stories and cultural identities since the beginning of time. The earliest surviving piece of literature, The Epic of Gilgamesh, references a global flood that is strikingly similar to that of the Judeo-Christian tradition. Indigenous oral histories include variations of flood narratives and in recent time, regions around the world have been ravaged by rising waters. There is no doubt that collective identity is heavily influenced by the natural world. Yet water in its many forms also nurtures and sustains life.

Personal and collective identity are defined by embellished narratives that border myth; this show explores the ambiguous threshold between perception and reality. The artworks are inspired by my childhood in a small town located in the foothills of the Cascades, where the Sultan and Skykomish rivers join. The narrative poetically departs from fact into myth when familiar forms are used in unfamiliar arrangements; mirroring the fragmented nature of memory.

The materials in Origin Stories are sourced from my hometown. The shotgun shells collected from an obscure logging road. Lace table clothes and handkerchiefs from a local antique store. Jars of pebbles, fish bones and water from the Sultan River. Photographs from my mother’s photo album.

My Great Grandmother features prominently in the work. She was influential in my formative years and has shaped my visual aesthetic, humour, and deep yearning for adventure. Like many immigrants from ‘the old country,’ she had a distanced relationship with her own origin stories.

Together, this body of work weaves an intergenerational story that is shaped by glacial rivers and family narratives. 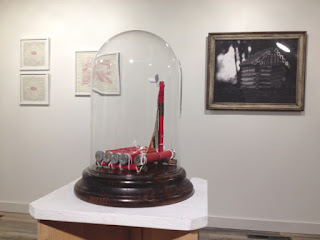 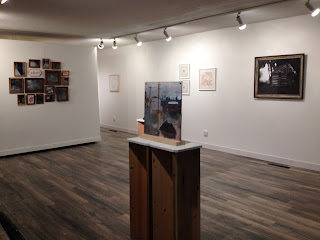 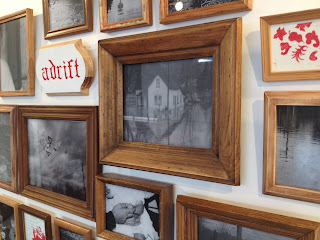 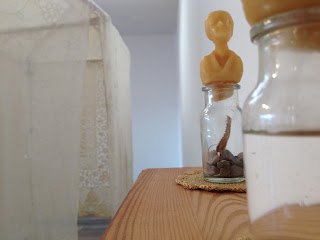 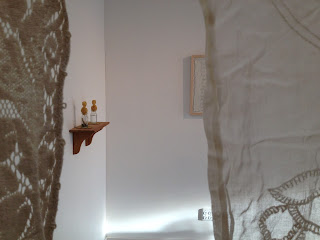