It's not everyday that a textile artist lands in 'Linenopolis'. What I didn't know before I came to Belfast is that it supported the largest linen industry in the world in the second half of the 19th century.

This week I explored the city through graphite rubbings on fabric. It seemed like a good starting point. I did a similar project in London because there were so many monuments. In Belfast, monuments and commemorative plaques play a different role. Instead of honouring adventures who left to fight in foreign wars and conquer the rest of the world, these words honour the freedom fighters (or terrorists, depending on which side you're on) in their own country. Men who died as a direct result of the hunger strikes during The Troubles, graves marking the deceased from Catholic and Protestant communities. Brick and steel walls called Peace Walls that separate neighbours from any form of interaction.

The piece below collects words from West Belfast's Milltown Cemetery. I would go on about how imfamous this place is, but it's not necessary. Is there a piece of land in this city that hasn't seen sectarian violence?

Years ago I wanted to work towards a show called 'Rend/Mend'. I dropped the idea at the time, but it's resurfacing. 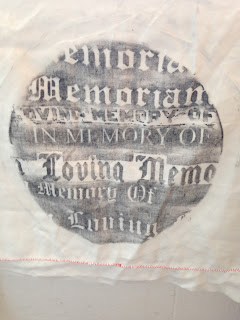 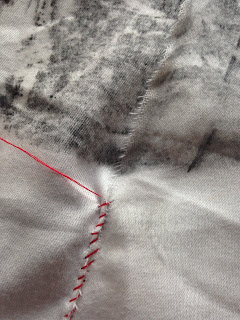