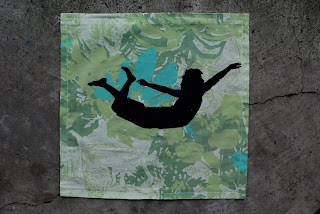 “[In the city] extremes coincide—extremes of ambition and degradation, brutal oppositions of races and styles, contrasts between yesterday’s buildings, already transformed into trash cans, and today’s urban irruptions that block out its space.”

Every time I walk into the downtown core of East Vancouver I cross an invisible line that runs from False Creek (a condominium complex) to the Pacific Central Station. This line divides the normal from the abnormal, the livable from the unlivable.

My work seeks to bridge this gap. It is the gap between myself and the other, between wealth and poverty. between hope and despair. In my artwork I search for ways to reveal the inherent worth found in the people who inhabit the margins of society. This piece is twofold: the Façade Series is the visible representation of an unseen barrier and Presence is my personal endeavor to cross that barrier.

In Façade I explore separation and the dichotomy between the sacred and the profane. These low-income hotels are metaphors for the beautiful and vastly misunderstood people who reside within them. The building’s exteriors are neglected and abused but the windows provide vague glimpses into individual lives. Through these paintings I aim to challenge misguided perceptions and transform that which is profane—even offensive—into something imbued with reverence.

Presence is a public art piece, so titled because it hinges on physical presence and the giving of gifts in order to bridge societal gaps. It originated from my desire to gift something to the people in the Downtown Eastside that they haven’t already received in some form of charity. I want to honor those who have been forgotten by the rest of society—I want to minimize the degree of separation between the other and myself.

The seventy cloth gifts bear the image of an ambiguous figure that exudes a strange gracefulness while existing between gravity and levitation. The playful figure is completely free, transcending hardship and reaching for the eternal.

I wrote the recipient’s name in a gift-tag format on every cloth. Calling someone by their name is a simple act of human recognition. Madeleine L’Engle recognizes the importance of names: “To be given a name is an act of intimacy as powerful as any act of love.” 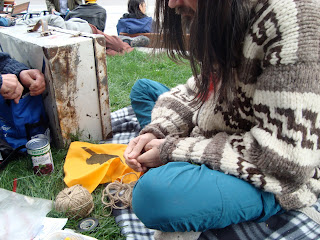 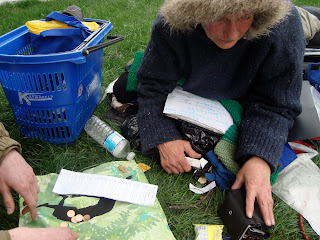